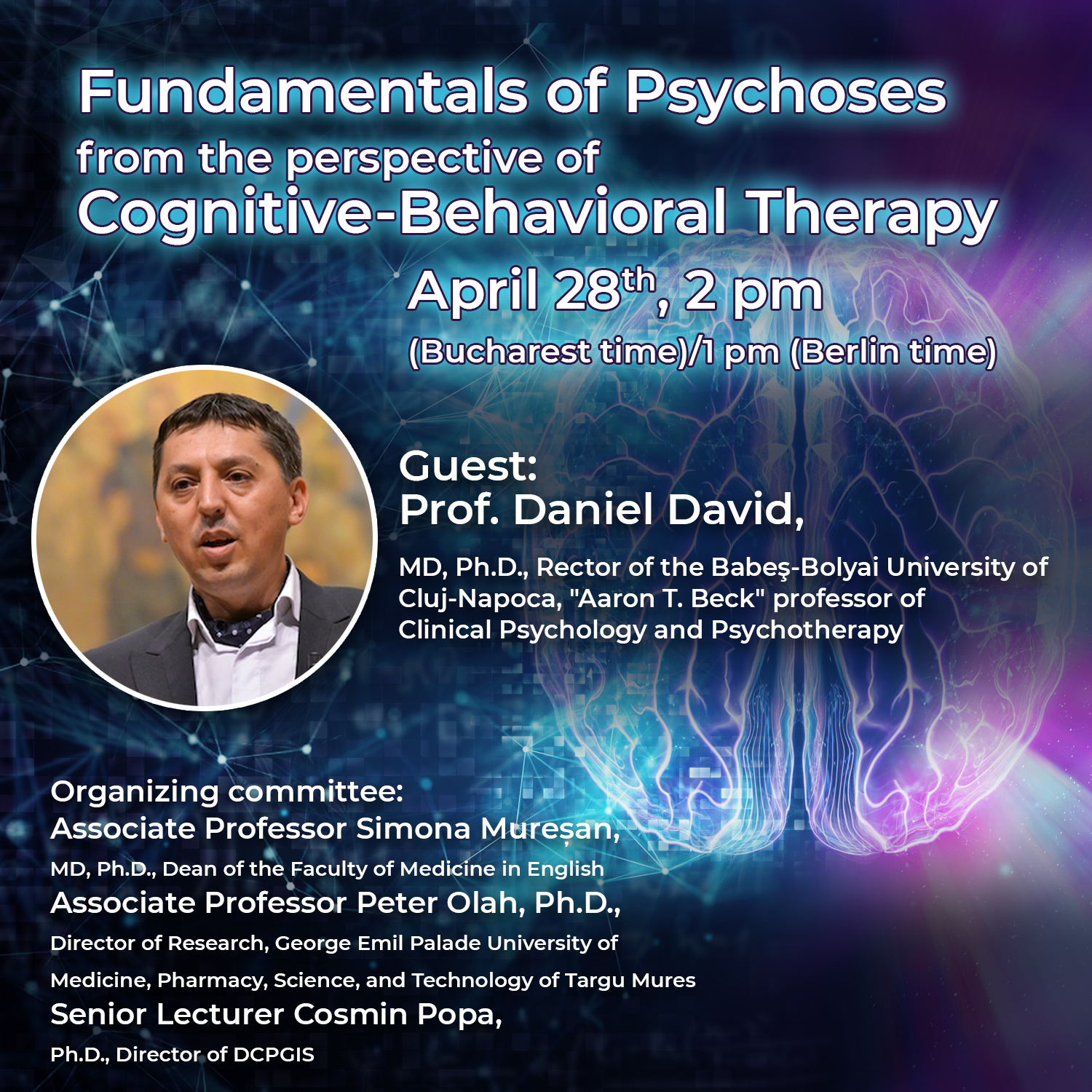 Psychoses describe severe mental disorders with important implications for both the functionality in patients’ everyday life and for their quality of life. The treatment of psychosis consists of medication combined with Cognitive-Behavioral Therapy (CBT). Nevertheless, some studies in the last decade indicated that CBT can be used as a monotherapy, representing an efficient treatment for patients with psychosis who refuse medication and/or for those who are resistant to psychotropic treatment. In this lecture, professor Daniel David will present the newest methods in the research and practice regarding psychosis and its social implications. This diagnosis represents a challenge currently, because it is already known that some people develop post COVID-19 specific symptoms of psychosis, or/and even psychotic disorders.

Daniel David is a Romanian academic, as well as a known practitioner and researcher on the applications of Cognitive-Behavioral Therapy (CBT). He is the rector of the Babeş-Bolyai University of Cluj-Napoca, and “Aaron T. Beck” professor of Clinical Psychology and Psychotherapy at the same university. Daniel David is also an adjunct professor at Icahn School of Medicine at Mount Sinai, leading the Research Program at Albert Ellis Institute in New York.

His main academic interest refers to the implications of cognitive sciences in the clinical area. Specifically, he contributed to a significant degree to the development of the theory and practical implications of rational-emotive and cognitive-behavioral therapies (CBT/REBT), which brought him both the Aaron T. Beck Award and the Albert Ellis Award of the International Institute for the Advanced Study of Psychotherapy and Applied Mental Health. In 2004, he received the inviation of the Journal of Clinical Psychology as a “Guest Editor”, organizing a special issue with the following title: “Cognitive revolution in clinical psychology: Beyond the behavioral approach” in order to expose the state-of-the-art regarding the influence that the cognitive revolution had on the clinical field. As a founding editor of the Journal of Cognitive and Behavioral Psychotherapies (abstracted: SSCI/Thomson ISI Web of Science; SCOPUS; PsycInfo; IBSS and full text: EBSCO; ProQuest), a Journal focused on evidence-based practice in psychology, he expanded on the ramifications of evidence-based clinical psychological practice. At the moment, Daniel David is the co-editor of the prestigious Journal of Rational-Emotive and Cognitive-Behavior Therapy. In 2013, he started the coordination of two research platforms, namely The SkyRa Platform for Clinical Cognitive Neurosciences and the PsyTech-Matrix Platform in Robotics/Robotherapy and Virtual Reality Psychotherapy, which belong to the International Institute for the Advanced Study of Psychotherapy and Applied Mental Health. These platforms have both been integrated within the Mapping of the European Research Infrastructure Landscape (MERIL database).